Owner of Occupy.com Selling It for Six Figures 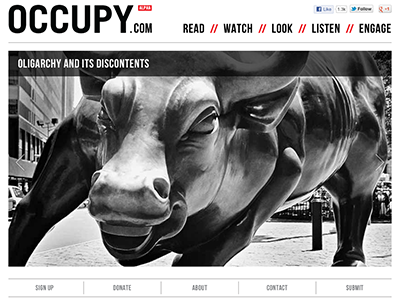 Virginia Comito, d.b.a. V.L. Raymer, is a California-based domain investor who bought occupy.com in 1998. Now, she’s selling it to the one percent.

“People who are extremely wealthy, who are philanthropic, who want to help the movement, the concept would be for one of those folks to buy it and donate it to Occupy, buy it and have it serve as a central repository since there is no centralized resource,” said Karen Bernstein, a New York-based lawyer who handles Ms. Comito’s domain sales. ”This would be a perfect match,” she said.

OccupyWallSt.org has been serving as the main hub for updates from the organizers, but it’s not being marketed as an official online headquarters.

Ms. Bernstein hopes to get “six digits” for the domain, which ordinarily would have been worth a few thousand.

Ms. Comito owns on the order of 4,000 domain names, which she started purchasing in the late 90s–cakebooks.com, cherokee.com, thighs.com, citydata.com, sportscoverage.com–many of which are sitting empty or with placeholders.

Ms. Bernstein said that Ms. Comito, who declined to comment, approached her with the idea to sell occupy.com.

There has been some interest, she said, but couldn’t disclose what the highest offer was.

Ms. Comito has had a few of the legal run-ins that come along with domain investing, including a judgment of bad faith registration with the evening music radio show “Delilah After Dark,” which successfully argued its trademark, as well as being named by an overly aggressive attorney in an apparel counterfeiting ring. “My client was wrongly accused of being an apparel counterfeiter and the plaintiff dismissed the case,” Ms. Bernstein said in an email. “We are seeking $96,000 in attorneys’ fees against the aggressive attorney and her clients and for the court to dismiss the case with prejudice.”

Would Ms. Comito consider donating the domain name herself, we wondered, in the absence of a buyer?

“I can’t make a comment on that,” Ms. Bernstein said.

Business is good, she said, but not that good: Ms. Comito is still a decided member of the 99 percent, even though the domain investor is not personally interested in the Occupy Wall Street movement.